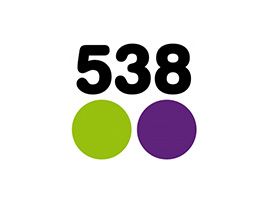 TV 538 is a music television channel that airs music videos and live coverage of its radio broadcasts. Dutch radio station 538 launched the TV channel on 4 July 2011. It broadcasts 24 hours a day and airs across the Netherlands.

Radio 538 started a television channel called TV 538 on July 4, 2011 in the Netherlands. The channel is broadcast via UPC and since September 2011 also on Ziggo. From 17:00 to 18:00 the program Top 538 will be broadcast on weekdays and from Monday to Wednesday broadcast by Barry Paf and on Thursday and Friday by Kimberly van de Berkt. Saturdays from 20:00 to 23:00 pm there´s the popular program Dance Department. Saturdays from 16:00 to 18:00 pm Top 40 with Jeroen Nieuwenhuize which only shows the most popular clips.

The focus is on non-stop clips that can be requested by listeners. In addition, the station airs entertainment, news, live performances, interviews and events from, accompanied by the DJs of 538. The live broadcasts are both broadcast from a TV studio and on location while Turn up the Beach, Live38XXL, 538PUUR, 538 voor Warchild or 538 Demo Duel.